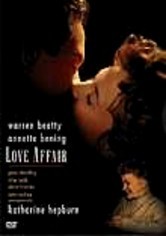 1994 PG-13 1h 48m DVD
Warren Beatty and Annette Bening star as frustrated lovers who are engaged to other people in this 1990s remake of the 1939 classic of the same name, which was also retold in the 1957 romance An Affair to Remember. When sparks fly between the two on board a ship, they decide to meet again in three months to see if it's meant to be. Hollywood legend Katharine Hepburn co-stars as Beatty's aunt in her final film role.