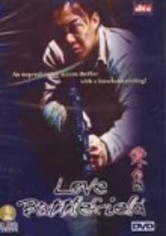 2004 NR 1h 36m DVD
Ka Yui (Eason Chan) and his girlfriend, Ching (Nikki Chow), have a tumultuous relationship that continually puts them on the brink of breaking up. Hoping that a European vacation will solve their problem, the quarreling couple makes a concerted effort to get their relationship back on the right track. But during their trip, their car is stolen, a fight breaks out, and the car thieves kidnap Ka Yui. Question is, has Ching had enough?