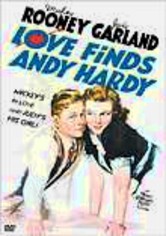 1938 NR 1h 31m DVD
A hugely popular series of films in the late 1930s and early '40s, the Andy Hardy movies provided a platform for many young up-and-coming MGM stars, introducing them to American audiences. In Love Finds Andy Hardy, Andy (Mickey Rooney) gets more than he bargained for when he finds himself with two dates to the big Christmas dance. Judy Garland, Ann Rutherford, Lana Turner and Fay Holden co-star.