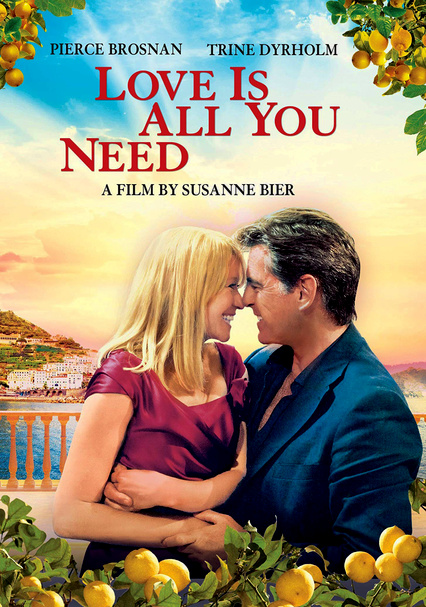 2012 R 1h 52m Blu-ray / DVD
Pierce Brosnan stars in this romantic comedy about several people in Sorrento, Italy, searching for love and dealing with jealousy, passion, romance and loneliness as they struggle to change their lives for the better.

Parents need to know that Love Is All You Need is a dramedy about love and marriage that mixes sadder moments with light ones. For a romcom of sorts, it takes on some heavy themes -- including mortality, death, infidelity, and sexual identity -- that are a better fit for older teens and adults. Some scenes feature partial nudity (a woman walks in on her husband in a sexually compromising position with his female colleague, and the colleague is naked from the waist down, with her rear end visible), opposite-sex and same-sex characters kiss, there's some drinking (including to drunkenness), and characters swear ("s--t," "damn," etc.) in both Danish and English.

A brief scene shows a wife finding her husband in the middle of a sex act with another woman. The mistress is nude from the waist down, and her behind is visible. In another scene, a woman is shown swimming naked in the sea. Couples (men and women; two men) are shown kissing.

A young man takes a swing at his father in anger over his mother's mistreatment.

Some use of "s--t" and "damn," mostly in Danish. (The movie is in both English and Danish.)

Sometimes, people find each other at the exact moment they need each other. Also, kindness, honesty, and patience rule when it comes to relationships.