Love Is Colder than Death 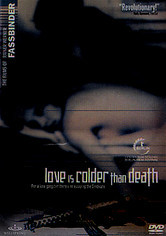 Love Is Colder than Death

1969 NR 1h 25m DVD
Rainer Werner Fassbinder directs and stars in his first film as Franz, a pimp who has refused to join a local crime syndicate. When the syndicate sends some "muscle" (a guy named Bruno) to persuade Franz to join, the two criminals hit it off. Soon, the pair of wise guys begin a dangerous crime spree that alarms Franz's girlfriend, Joanna, and builds toward a daring bank robbery.