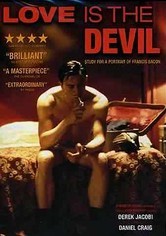 1998 NR 1h 27m DVD
Director John Maybury explores the life of British painter Francis Bacon in a film that's as disturbing as the artist's own work. The film focuses on Bacon's turbulent affair with George Dyer, a burglar who breaks into Bacon's apartment and stays on to become his lover. Bacon treats Dyer as a sex object, but Dyer falls in love anyway, trying desperately to connect with the emotionally unavailable Bacon.