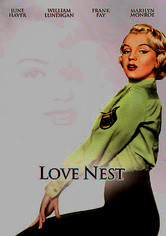 1951 NR 1h 24m DVD
Jim Scott (William Lundigan) is a writer who moves into an apartment building he bought with his wife (June Havre). He thinks he'll save money by living at the property, but his hopes are dashed when the cost of maintaining the building far exceeds what he expected. After con artist Charley Patterson (Frank Fay) swindles tenant Eadie Gaynor (Leatrice Joy) and is arrested, he pitches his memoirs to Scott, giving the writer's career a boost.