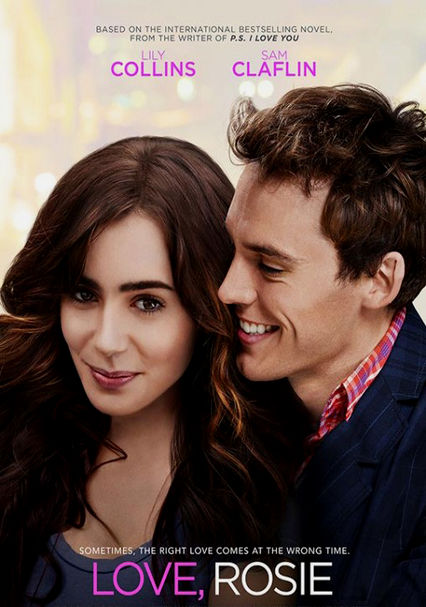 2015 R 1h 42m DVD
Best friends from the time they were tykes, Rosie Dunne and Alex Stewart remain close as adults. Although each takes a different partner, an intimate attachment between them lingers -- one that could dramatically affect the course of their lives.

Parents need to know that Love, Rosie is all about long-distance, long-term, unrequited love. Several scenes feature teens talking about losing their virginity/having sex, and there's one quick scene in which two of them actually do the deed (a girl is shown in her bra, and an unintended pregnancy results). There's also a fair bit of drinking (including a teen drinking until she passes out) and some smoking, as well as plenty of swearing, notably "f--k" and "s--t." But this tale of recognizing love -- and acting on that realization -- will resonate with older teens and up.

Some discussions about sex, especially how and when high school students lose their virginity. A brief sex scene shows a woman in her bra. Much of the film deals with the unplanned pregnancy that results (the condom came off) and how raising a child disrupts your life. A couple is caught in bed together (nothing graphic shown).

A few arguments; one scene shows a woman punching her husband when she finds him with another woman.

A fair amount of swearing, especially "f--k" and "s--t," as well as British slang like "wanker" and "bollocks."

Ending up with the wrong person can make you miserable, but love is out there if you're able to recognize it when it appears.

Several scenes include people drinking -- at bars and nightclubs, at meals, and while hanging out with friends. In an early scene, a teen girl drinks to the point of passing out. Some characters smoke cigarettes.