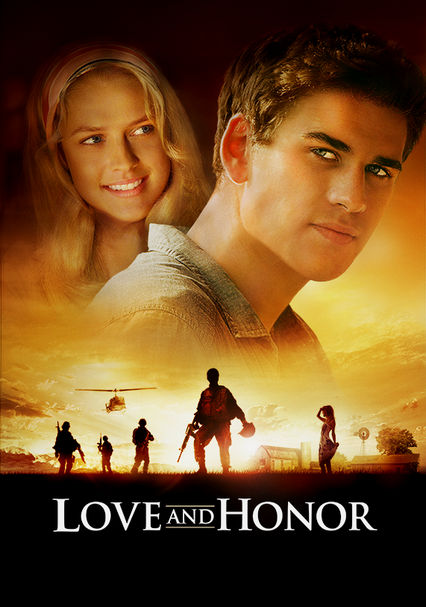 2013 PG-13 1h 36m Blu-ray / DVD
Dalton, serving in Vietnam, gets a "Dear John" letter and turns a week's furlough into a desperate (and illegal) trip home to win back his girl. Joined by his friend and fellow soldier Mickey, Dalton's move could land them both in the stockade.

Parents need to know that teen fans of The Hunger Games co-star Liam Hemsworth may well want to see Love and Honor -- but know that it has a fair bit of drug use, sexuality, and violence. Considering the '60s setting, the drug use (marijuana) isn't that unexpected; nor is the tension between protesters and police and the shooting in the movie's brief war scene. There are two love scenes (bare-chested men and bra-wearing women) and a few passionate kisses. Teens will at the very least learn, if they haven't already, about the opposition to the Vietnam War.

Two love scenes show bare-chested men and women who are either wearing a bra or have a sheet or blanket covering them up. A couple of passionate kisses -- one that's scandalous because it's obvious the young woman doesn't believe in monogamy (she had just gotten engaged to someone else).

The opening sequence takes place in Vietnam, and there are a couple of close calls, but only one character is actually shot and injured. Mickey discusses some of his fellow soldiers who've died in battle, and Dalton hits a pacifist who was kissing his fiancee. Police roughly arrest protesters, and two friends find out that another friend in Vietnam has died.

The movie promotes standing up for what you believe in and making sure your voice is heard. It also stresses the importance of honesty in romantic relationships.

College-age students and soldiers smoke marijuana (a few times) and get drunk and/or drink heavily -- in keeping with the reputation for open drug use among young people in the '60s.