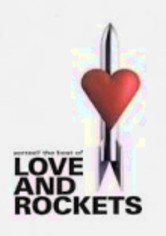 2003 NR 1h 41m DVD
Starting with The Haunted Fish Tank, an anthology of music videos spanning the years 1985 to '89, this retrospective featuring Goth-rooted British rockers Love and Rockets contains nearly every video the band released, along with their solo ventures. Selections include "Ball of Confusion," "No New Tale to Tell," "Mirror People" and "So Alive," plus three tongue-in-cheek audio tracks by the group's alter egos, the Bubblemen.