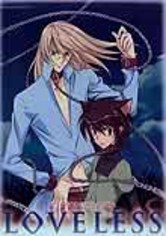 2005 NR 3 discs
Director Kurenai Yu's adventure-filled anime series finds sixth-grader Aoyagi Ritsuka at a crossroads. His older brother Seimei was brutally murdered two years ago, and now Ritsuka thirsts for revenge. But how can a 12-year-old fight for justice? Enter Agatsuma Soubi, Seimei's former cohort, who arrives on the scene to help the boy hunt down the killers and uncover the truth behind the mysterious murder.