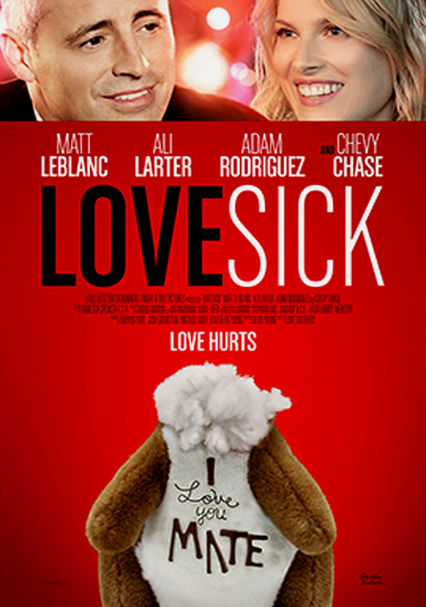 2015 NR 1h 25m DVD
School principal Charlie Darby is successful in life but for one glaring exception: Every time he begins a relationship, his excessive jealousy and paranoia ruin things. Now that he's found the perfect woman, though, he vows to act differently.

Parents need to know that Lovesick is a quirky romantic comedy about Charlie Darby (Matt LeBlanc), a man who doesn't know that when he falls in love, a psychotic reaction is triggered. Despite that, there isn't any violence to worry about, but adults do drink in social settings and there's a fair bit of swearing (including variations of "f--k," "s--t," "bitch," and "ass"). Characters aren't shown having sex -- except for a cartoon drawing at the beginning of the movie -- but they do kiss, and Charlie has an older neighbor who likes to discuss and watch porn in Charlie's apartment (nothing graphic is visible on screen, but moans can be heard). And one of Charlie's terrible rebound dates shoves her hands down her pants while sitting on his couch.

The main character learns that trust and open, honest communication are essential for any relationship. It's important to believe that you're good enough for someone else, and you can't expect people to be perfect but should instead accept them for who they are.

Adults drink beer in bars and wine at dinner.