Low: You May Need a Murderer 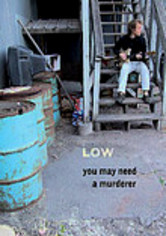 Low: You May Need a Murderer

2007 NR 1h 10m DVD
Dutch filmmaker David Kleijwegt followed the American indie chamber-rock act Low around for nearly a month to create this portrait-style documentary that tracks the at-home and on-the-road activities of band members Alan Sparhawk and Mimi Parker. But the film isn't just about the music; it's also about the Mormoan church's role in Sparhawk and Parker's work, the spiritual state of modern-day America and the power of love.