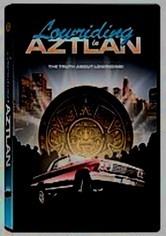 2005 NR 1h 0m DVD
This eye-opening documentary aims to dispel some of the stereotypes and myths surrounding the increasingly popular phenomenon known as lowriding. Featuring jaw-dropping footage and interviews with legendary lowriders such as Kita Lealao, the film tackles a number of common misconceptions about the cruising culture. From souped-up cars to the brushes with law enforcement that go with the territory, you'll see it all -- up close and personal.