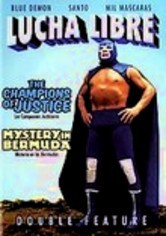 1970 NR 2h 37m DVD
Mexican grappling great Blue Demon (aka Alejandro Cruz) is joined by Santo, Mil Mascaras and other wrestling giants in this high-action double feature. In The Champions of Justice, the heroes must battle a mad scientist and the team of mighty midget wrestlers he's created. In Mystery in Bermuda, Blue Demon and his friends fight to protect an Iranian princess from a band of villains that's trying to stop her from signing an important treaty.