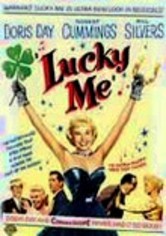 1954 NR 1h 41m DVD
One of the first musicals to be shot in then-cutting-edge CinemaScope, this colorful romp stars Doris Day as Candy, a struggling singer who tests the limits of good fortune when she meets a handsome admirer (Robert Cummings) who just happens to be a famous songwriter. But there's a catch: Candy has no idea who he is. Bonus features include the Oscar-nominated Sylvester and Tweety cartoon "Sandy Claws."