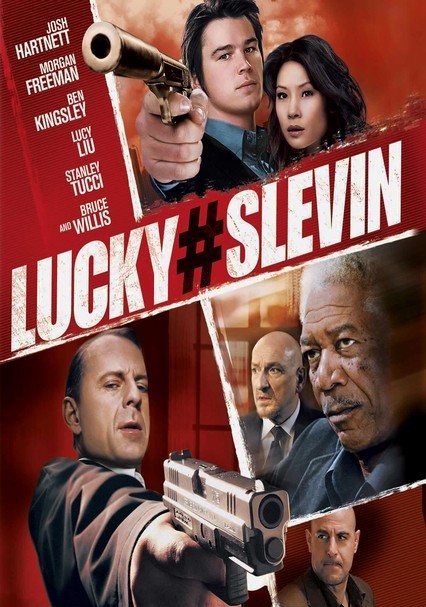 2006 R 1h 50m Blu-ray / DVD
While checking out the apartment of his missing friend Nick Fisher, drifter Slevin Kelevra is mistaken for Nick by thugs and forced to participate in a high-profile murder for a crime boss, making it clear how much trouble Nick is really in.

Parents need to know that the movie includes multiple violent scenes (shooting, neck- and nose-breaking, fighting, knifing, smothering in plastic wrap), as well as one flashback where a young boy sees his father killed by a hitman (the shooting is off-screen, the boy's stunned and frightened reaction is visible). Most characters are professional thugs and killers, gamblers, and con-men. One female character works in a morgue, where a burned corpse is visible (close-up of the grisly arm). Characters curse frequently, drink occasionally, and a few scenes display or insinuate sexual activity. None of the characters provides an admirable role model; some are cleverer than others.

Includes frequent killings and beatings (knifings, shootings, nose-breaking, neck-breaking, punching faces and stomachs, poisoning); opens with a man shot in his car (windows break, blood splatters); a horse takes a bad spill on a track; a woman is shot offscreen (you see blood splatter); a boy witnesses his dad's execution (you see blood on car windshield); a man is shot from a rooftop; explosion; dead, bloody bodies; Lindsey works in a morgue and so deals with dead bodies (one is grotesquely burned).

Heroes are assassins, gamblers, and cheats who outsmart mob bosses.