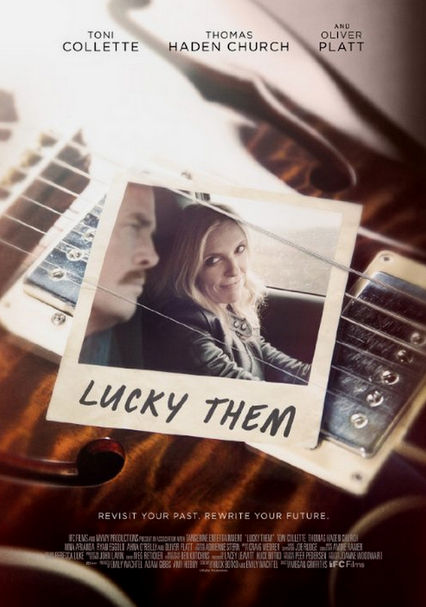 2013 NR 1h 37m DVD
Seattle music journalist Ellie Klug is ordered to write a feature on her ex-boyfriend, celebrated musician Matthew Smith, who disappeared 10 years earlier, but her reluctant mission is complicated by the presence of Charlie, an amateur documentarian.

Parents need to know that Lucky Them is rooted in a melancholy premise: A journalist is assigned a career-saving story about a musician she used to love who walked out on her and is thought to have killed himself. While there are plenty of lighter moments, it definitely treads on themes that are too heavy for younger viewers, including suicide and emotional recklessness. Adults drink, sometimes out of stress; smoke weed; and fail to confront their demons. Expect some swearing (including "f--k") and scenes showing couples making out and having sex (though there's no graphic nudity).

Couples make out in bed; male torsos and women's shoulders are bare. References to "glory holes" and a 14-year-old losing his virginity to a 40-something housekeeper. One scene shows a couple having sex against a wall (the woman's face and the back of the man's head are visible). One scene has a man ogling a woman's (covered) breasts; she calls him out on it.

Verbal arguments and lots of talk about how one character may have committed suicide by jumping into a waterfall.

Sometimes, your biggest foe is yourself. So it may be best to work on yourself rather than creating distractions from doing so.

Social drinking in bars and restaurants. One character drinks more heavily when her work and personal lives both start to fall apart. One man smokes weed in his office.