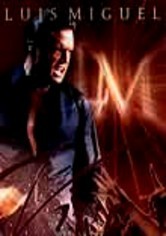 2000 NR 1h 36m DVD
Latin sensation Luis Miguel thrills in this 2002 concert filmed at the Fundidora Stadium in Monterrey, Mexico, part of a series of shows the crooner scheduled to support the release of his CD "Amarte es un Placer." Miguel performs two songs, "Y" and "La Bikina," backed by a full mariachi band, as well as his other hits such as "Suave," "Como Es Posible Que a Mi Lado" and "Te Propongo Esta Noche."