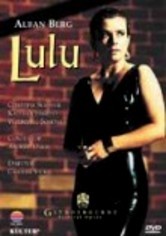 1997 NR 3h 3m DVD
Viennese composer Alban Berg's tragic opera comes to life in this lavish 1997 production that uses a reflective music structure to chart the protagonist's rise and fall. Based on a pair of dramatic works once banned as obscene, the story follows a beautiful but heartless socialite (Christine Schafer) forced into prostitution and later killed by Jack the Ripper (Wolfgang Schöne). Andrew Davis conducts the London Philharmonic.