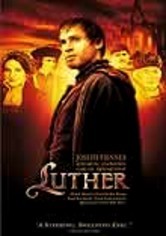 2003 PG-13 2h 4m DVD
This epic movie follows the life of Martin Luther (Joseph Fiennes), author of the then-controversial 95 Theses and founding father of the Protestant church, who, with the courage of his convictions, faced the wrath of the church in the 16th century. Alfred Molina co-stars as Johann Tetzel, with Jonathan Firth, Claire Cox and Sir Peter Ustinov rounding out the cast as Girolamo Aleander, Katharina von Bora and Fredrick the Wise, respectively.

Parents need to know that Luther is a historical biopic with a few gruesome images of corpses who have been hanged, burned, or dies in battle. The story of Martin Luther, the Catholic priest who stood up to the Pope and the church hierarchy in the 1500s and was nearly killed for his beliefs, is dramatized, but it does cover most of the important events in his life, and explains the impact of his ideas, which triggered the Protestant Reformation. For the most part, the film is fine for younger viewers, and explains important religious concepts.

Occasional references to men consorting with prostitutes, including priests. Martin Luther is shown kissing his bride as they relax in bed together.

Several scenes include potentially disturbing images, including people who have been hanged, burned at the stake, or dismembered in battle.

Martin Luther almost died for his beliefs, defying the Pope and the Catholic church, which he believed had become too focused on material wealth. He urges people to get back to the basic meaning of faith and to follow the original teachings of Jesus Christ, whose most fundamental message was simply to be a good person. It's a basic message that was deemed heretical and dangerous by the well-entrenched church hierarchy, and is still relevant today.