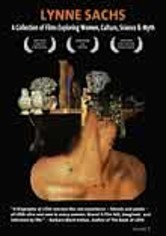 2005 NR 1h 5m DVD
Experimental filmmaker Lynne Sachs creates intricately layered works that defy viewers' presumptions about traditional cinematic structure. Two of her early movies -- Biography of Lilith and The House of Science: A Museum of False Facts -- grace this collection, along with a pair of Sachs' short films (Window Work and Photograph of Wind). Also included are interviews with four eminent Jewish scholars who discuss the Lilith myth.