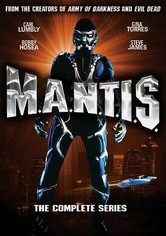 1994 NR 4 discs
This action-packed sci-fi series stars Carl Lumbly as Dr. Miles Hawkins, a brilliant scientist left paralyzed by a bullet who invents a superhuman metal exoskeleton that endows him with extraordinary powers. As he embarks on his crime-fighting missions, he confronts corrupt officials, skilled assassins, samurai warriors, killer robots, dinosaurs and alternate dimensions to make the city safe for ordinary citizens.