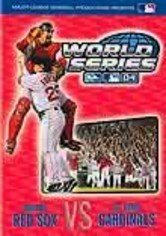 2004 NR 1h 30m DVD
The curse is reversed! Eighty-six years after the Boston Red Sox last won a World Series (in 1918), the team breaks the curse of the Bambino, sweeping the St. Louis Cardinals in four thrilling games. See all the heavy hitters -- from Johnny Damon to David Ortiz to Manny Ramirez -- along with great pitching from Curt Schilling and the bullpen as two titanic and talented teams slug it out for baseball's crowning glory.