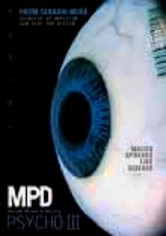 2000 NR 1h 47m DVD
Detective Kazuhiko Amamiya continues to probe the mysterious bar-code cult in the final two installments of the surreal, six-episode miniseries based on Eiji Ootsuka's manga series. Directed by cult filmmaker Takashi Miike, these tales follow the gumshoe (who suffers from multiple-personality disorder) as he investigates the spontaneous combustion of cult members and attempts to recover his missing child.