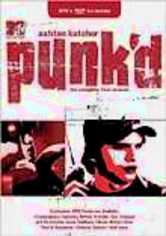 2003 NR 2 discs
Celebrities beware! Punk'd series co-creator Ashton Kutcher and his fellow pranksters take on the likes of Justin Timberlake, Frankie Muniz, Kelly Osbourne, Pink and others in this testament to sophisticated practical joking. The cameras roll as the elaborate tomfoolery catches celebrities off-guard in all sorts of odd situations, and this Punk'd series includes previously unreleased scenes and two entirely new episodes of pranking.

Parents need to know that Punk'd, both the MTV original and the BET remake, is a reality show about playing pranks on celebs on a grand scale. Jokes range from stealing and illegal gambling to physical altercations, police chases, and blowing things up. There's lots of swearing ("damn," "s--t"; "f--k" bleeped) too. Occasionally pranks involve sexual subject matter, including infidelity and the injury of genitalia. Kids may find these pranks funny, but they don't send the best messages. Viewers of all ages should be reminded that what they see here is produced by professionals and should not be tried at home.

Some pranks take place in bars.