MTV: The Real World You Never Saw: Back to New York 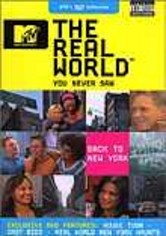 MTV: The Real World You Never Saw: Back to New York

2001 TV-14 0h 50m DVD
A decade after MTV's "The Real World" debuted in New York, the cameras returned to the city that never sleeps. The cast was different, but the craziness remained -- and this raucous video offers a few moments you may have missed. Go behind the scenes with Kevin, Lori, Mike, Coral, Nicole, Malik and Rachel as they partake of the Big Apple's forbidden fruits -- from skinny-dipping in the Hamptons to French kissing in a confessional.