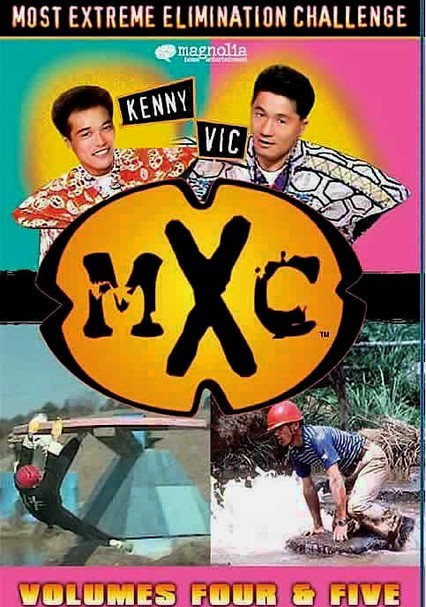 2003 TV-14 5 seasons
Spike TV concocts hilarious comedy by blending re-edited footage from the Japanese game show "Takeshi's Castle" with outrageous commentary from comedians Kenny Blankenship and Vic Romano, who ridicule the contestants striving to win the dough. The unusual challenges include the Rotating Surfboard of Death and the Downhill Giant Rice Bowl Slalom, which confront teams such as Inventors vs. Ex-Child Actors and Wedding Industry vs. Trucking Industry.

This English-dubbed Japanese reality program became the No. 1 rated show on the unapologetic Spike TV network targeted at young men. Its silly obstacle courses (Downhill Giant Rice Bowl Slalom) and humiliating challenges (Skipping Stones, where contestants have to step on the right stones to cross the pond or else fall in) will cause you to wince in vicarious pain. Comedic narrators Kenny Blankenship and Vic Romano add their often crass commentary.

Prepare to laugh -- and cringe -- as teams of hopeful contestants battle one another in a series of wild and silly challenges in this ultimate of game shows. Colorful characters Kenny Blankenship and Vic Romano provide the amusing play-by-play.

Entertaining mostly because contestants are willing to do anything to win, this reality TV experience is shot entirely on location in Japan, the home of shockingly bizarre game shows. Impossible tasks and stunts are carried out -- and usually over a giant pool of mud. Viewers are greeted with egregious displays of eagerness, humiliation and courage, a humorous and often hazardous gauntlet of physical acumen and self-determination.

Spike TV's English-dubbed Japanese game show is back for another round of back-bending, face-planting hilarity as a new collection of ever-eager contestants step up to brave the impossible tasks that stand between them and the top prize. Adding insult to injury are hosts Vic Romano and Kenny Blankenship, whose irreverent commentary and witty banter can be every bit as damaging to the contestants as the humiliating physical challenges.

Spike TV is at it again with the fifth season of its popular (and painful-to-watch) Japanese game show featuring uninhibited contestants maneuvering through impossible obstacle courses and physical challenges. This season showcases matchups such as Famous Felons vs. Babe Magnets and Sexual Pioneers vs. The World of Violent Films, while hosts Vic Romano and Kenny Blankenship provide the irreverent dubbed commentary.

Parents need to know that although at first glance this show might appear to be a typical (if goofy) reality competition series, it's really an elaborate spoof of over-the-top Japanese game shows. All of the dialogue has been newly dubbed for the English series, and all of the characters (including the hosts) are fictional. Each episode has a "plot" of sorts in which two diametrically opposed teams duke it out for the championship, but, really, the series' main attraction is watching people compete in strange physical challenges and obstacle courses that usually result in them getting beaten up like human pinatas. It's exactly the kind of humor teen boys love, though parents may not get the appeal.

Some players sustain cuts and scrapes during their challenges; others take what look to be really nasty falls. It's all played for laughs, but it's hard not to wince sometimes. The competitors all wear safety gear.

Contestants' (often painful) mistakes are played for laughs. The show gleefully skewers its contestants, assigning them to often-stereotypical groups and mocking their body language and behavior -- though all of the dialogue is dubbed, so none of the actual people shown are being mocked directly. Some Asian stereotyping -- though, again, it's all meant to be funny (and is really pretty tame, all things considered).