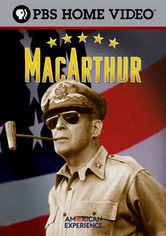 1999 NR 4h 0m DVD
Gen. Douglas MacArthur rode into infamy with his famous words, "I shall return", uttered during his battles against the Japanese in World War II. Get to know the general and his accomplishments in this fascinating PBS documentary. Esteemed for his leadership in the Pacific Theater, including the Philippines and South Korea, MacArthur faced political skirmishes at home with President Harry Truman.