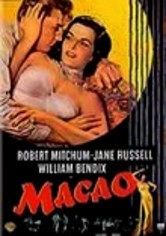 1952 NR 1h 21m DVD
Josef von Sternberg's classic mystery follows a trio of travelers who cross paths on the way to the Asian port city of Macao, then become caught up in a conflict between Chinese cops and an American gangster once they arrive. On the lam for a crime he didn't commit, Nick Cochran (Robert Mitchum) meets a job-seeking singer (Jane Russell) and a salesman on a gambling vacation. When things heat up in Macao, it turns out they're all hiding secrets.