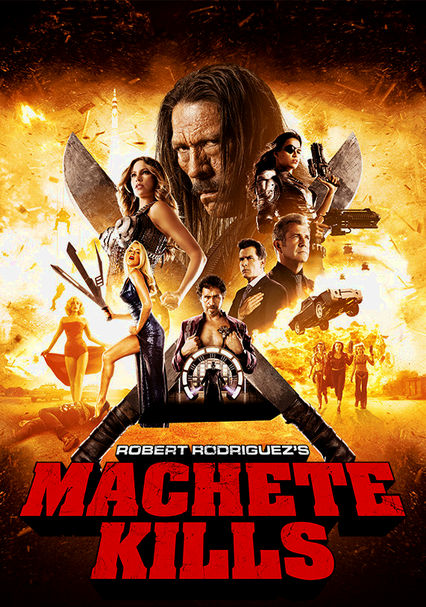 2013 R 1h 48m Blu-ray / DVD
Vigilante and ex-Federal Machete returns to battle when the U.S. government recruits him to take down a psychotic revolutionary and a billionaire arms dealer trying to launch a weapon into space.

Parents need to know that, like Machete, Machete Kills attempts to re-create an intense, over-the-top "grindhouse" movie experience with gleefully excessive violence, sexuality, and language (though the energy seems to have flagged somewhat this time around). Violence includes tons of blood and gore, including a microwaved plasma bag that explodes and sprays all over a hospital room, plus multiple beheadings, slicings, guttings, and shootings, as well as fighting. Language is also very strong, with many uses of "f--k," "s--t," and "p---y." There's very little nudity, but viewers do see one sex scene and a woman wearing bottomless chaps, and there's some sexual innuendo. Plus, all the women in the movie are viewed as objects, dressed in sexy, revealing clothing (one even has a machine gun bra).

A Miss America competitor seduces Machete; as they start to have sex, the movie switches to a weird, distorted color scheme with the joke "put on your 3D glasses now" (the movie isn't in 3D). Sofia Vergara's character has a machine gun bra; she also has a smaller gun that fires, penis-like, from her crotch. One female character is seen wearing bottomless chaps, and all other female characters wear sexy or revealing outfits. There's a joke about fake breasts and other innuendo.

Very strong, frequent violence, all of it over-the-top and cartoonish, with geysers of blood and mountains of gore. Characters are frequently beheaded or split in half. One man is killed when the lead character slices into his stomach, grabs his intestines, and tosses them into the nearby whirling blades of a helicopter. In another scene, the lead character microwaves a packet of blood in a hospital, resulting in a huge blood spray. The movie is full of crazy weapons, and there are plenty of shootouts. Hand-to-hand and martial arts fighting are shown. A main character dies, a character's face is burned, and another loses an eye.

There's no real attempt at a positive message amid the nonstop violence, sex, and sexual innuendo -- none of which has much in the way of consequences.

A Pepsi machine is visible in one of Lady Gaga's scenes.

Machete takes a shot of tequila with the president of the United States. Secondary characters smoke cigars.