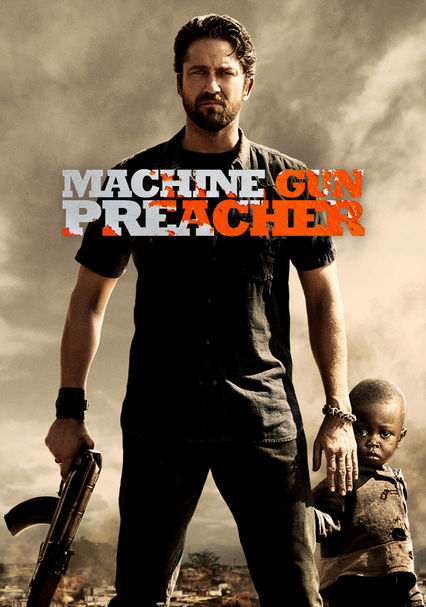 2011 R 2h 7m Blu-ray / DVD
Gerard Butler stars in this true-life story of Sam Childers, a drug dealer who turns his life around to become a spiritual warrior. His mission? Rescuing child soldiers in the Sudan from lives ruined by their forced participation in bloody conflict.

Parents need to know that this fact-based drama set mostly in war-torn Sudan includes several combat sequences and some especially gruesome images featuring torture victims. The main character (played by Gerard Butler) transforms from a biker-gang thug into a religious man over the course of the movie. He also swears constantly ("f--k," "c--ksucker," etc.), drinks heavily, and, in the beginning, shoots heroin. It's an inspiring story, though not a pretty one.

One scene features a couple having sex in a car, seen from the outside, and another shows them kissing passionately. There's no nudity, though a woman appears in her underwear.

The film has quite a lot of violence, and some of it is horribly gruesome. There are plenty of standard-issue combat sequences that include firefights, explosions, and bloody deaths. Additional scenes show wartime atrocities being committed and their terrible aftermath. This includes piles of mangled, smoldering corpses, a woman whose lips have been cut off, a child killed by a land mine, and a young boy who's forced to club his own mother to death. One character also menaces his wife; he doesn't hit her, but his actions are violent and intimidating.

The movie promotes the idea that people can change for the better and that there's a greater purpose in life. It also says that helping others can be a path toward paying for the mistakes of the past. On the other hand, the idea that fighting violence with violence is a good idea also comes across.

Sam has an extensive collection of Harley Davidson T-shirts that he wears throughout the film. Several car brands also get mentioned or are shown on screen, including Caprice and Buick. Sam offers a friend a Coke.

Several scenes in bars with people drinking beer, doing shots, and getting drunk. Some of the characters shoot up heroin on screen.