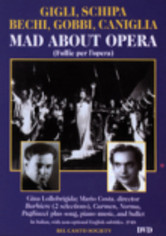 1950 NR 1h 35m DVD
This 1940s romp about a group of Italians who decide to present an opera is as much a bona fide concert as it is a screwball comedy, with some of the greatest opera singers of the era appearing as themselves. Gino Becchi (baritone), Maria Caniglia (soprano), Beniamino Gigli (tenor), Tito Gobbi (baritone) and Tito Schipa (tenor) perform songs from "Carmen," "Norma," "Pagliacci," plus Carl Maria von Weber's "Invitation to the Dance."