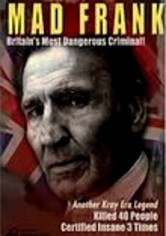 2006 NR 1h 59m DVD
Notorious killer "Mad" Frankie Fraser practiced an unorthodox form of dentistry on his enemies, just one of many gruesome facts revealed in this documentary about one of Britain's most dangerous underworld figures. From his multiple insanity diagnoses to his murderous ax-wielding rages, this program chronicles Mad Frank's astonishing criminal career, including the four decades he spent behind bars in 20 different prisons.