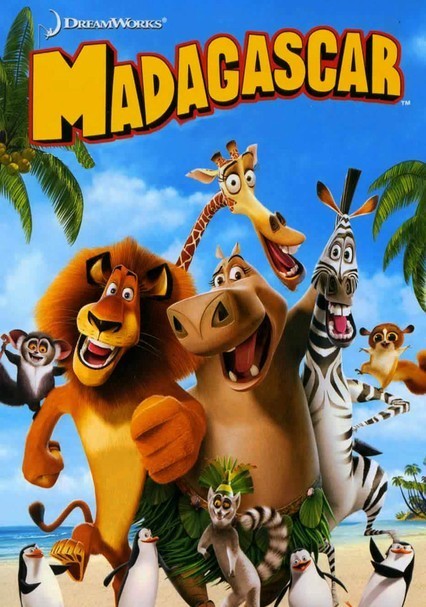 2005 PG 1h 26m Blu-ray / DVD
After escaping from the zoo, four friends are sent back to Africa. When their ship capsizes and strands them on Madagascar, an island populated by crazy critters, the pals must adapt to jungle life and their new roles as wild animals.

Parents need to know that there's some crude humor and sexual innuendo that will probably go over the youngest kids' head. The animals confront assorted dangerous situations, including an encounter with police, containment in crates (dark, closed spaces), a stormy sea and shipwreck, and, most alarmingly, a startling personality change in Alex, the lion, when he wants to eat his friends. There's a shooting with tranquilizer darts in which a character hallucinates to the tune of Sammy Davis Jr.'s song "Candyman" (younger viewers won't know this is about drugs, but the allusion is there). Gloria the hippo briefly appears with seaweed on her body, simulating "pasties" on breasts and crotch area. The lemurs are hunted by scary hyena-like creatures. A secondary plot has a crew of penguins acting like spies, which has them tunneling out of the zoo, knocking out a ship's captain, and stealing an ocean liner.

Overall the movie is about friendship and overcoming individual desires for the greater good. It's all very lighthearted, so the messages aren't going to make a huge impact here. Some conflicts and selfishness.

The movie has become a major franchise with plent of merchandise available for sale.