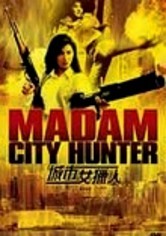 1993 NR 1h 28m DVD
Blending zany comedy with sizzling action sequences, Madam City Hunter stars martial arts maven Cynthia Khan as top-notch police detective Yang Ching, who finds her job -- and life -- on the line after she's framed for the murder of five drug addicts. Determined to bring the real culprits -- a gang known as the Five Fingers Mob -- to justice, Yang teams with a private eye (called Charlie Chan, no less) and sets out to clear her good name.