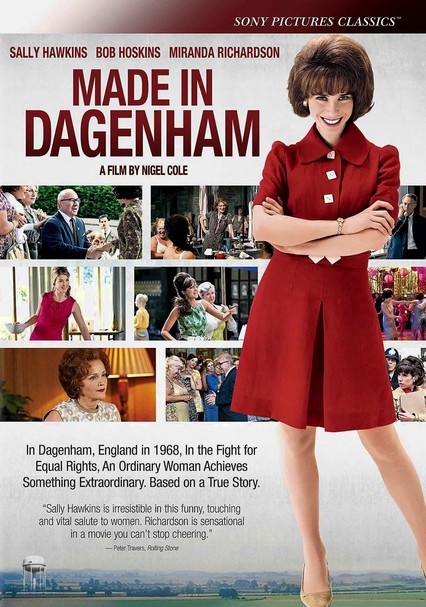 2010 R 1h 53m Blu-ray / DVD
Sally Hawkins stars in this cheeky dramatization of the landmark 1968 labor strike initiated by hundreds of women who rebelled against discrimination and demanded equal pay for their work in a London automobile manufacturing plant.

Parents need to know that though this film is rated R, based on occasional vulgar language ("f--k" in numerous forms, "bollocks," "arse," "s--t'), and one short sexual encounter (shot from the shoulders up; participants are clothed), it is an educational and entertaining look back at a courageous period in the history of women's rights. Set in England, the working class dialect may be hard for an American audience to understand in some scenes, but it most likely will not impact the viewer's general grasp of the story. One secondary character has a violent dream and then commits suicide off camera. His feet are seen swaying above the floor as his wife screams upon discovering him. Assorted women of all shapes and sizes remove their shirts and work in their bras in an uncomfortably warm factory. Many characters smoke frequently and there is some drinking and drunkenness when the workers unwind in local bars.

A couple is shown briefly, from the shoulders up and clothed, having sexual intercourse in a tavern bathroom. In a factory with soaring temperatures, some of the women remove their shirts and work in their bras in several scenes.

A man has a brief nightmare which recalls a wartime experience. There is an off camera suicide; the character's shoes, hanging and swinging are seen as a scream is heard.

In a hostile environment against substantial odds, even those who seem powerless can prevail if their cause is just and they have courageous leadership. Everyone must stand tall together when facing discrimination and unfairness.

The Ford Motor company is the chief villain in this film.

Set in 1968, many of the characters (including the leading men and women) smoke throughout. There is some drinking at a local bar and at a party, several participants are drunk.