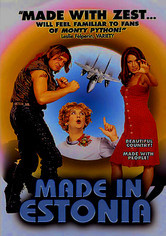 2003 NR 1h 40m DVD
Radio entertainers Mill (Madis Milling) and Norm (Henrik Normann) blur the line between reality and fantasy in this offbeat comedy. The two easygoing guys hide out in the broadcasting station, entertaining listeners with tales of a simpler life and a cast of colorful characters. As they immerse themselves in their tales, Mill and Norm lose their grip on reality, acting out their fantasies on live radio. Piret Laurimaa and Robert Gutman also star.