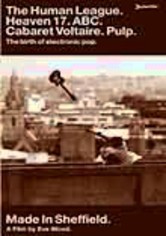 2005 NR 2h 8m DVD
After the punk rock movement of the 1970s revolutionized the music scene, a new pop sound evolved out of the British community of Sheffield. In Eve Wood's documentary, the filmmaker charts the rise of the electro-pop music that made bands such as The Human League, ABC, Heaven 17 and Pulp stars of the '80s. Includes film footage from the late '70s and early '80s, plus interviews with writers, DJs, fans and musicians about the town and the music.