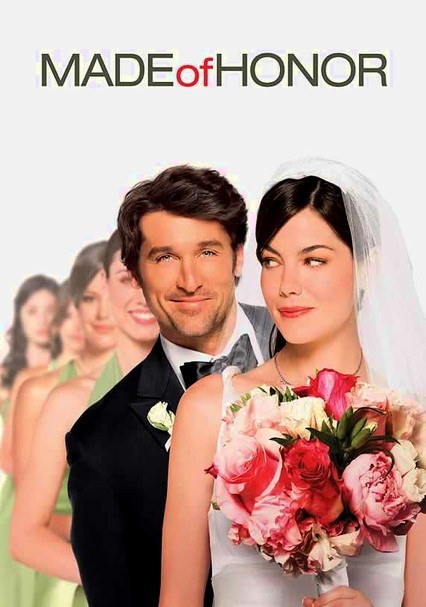 2008 PG-13 1h 40m Blu-ray / DVD
Only after his platonic best friend announces her engagement does a perennial skirt-chaser suddenly realize he loves her -- but will lose her unless he uses his role as her "maid" of honor to unravel her marriage plans.

Parents need to know that this predictably sweet romantic comedy, which will likely attract teen fans of star Patrick Dempsey (Grey's Anatomy), is an escapist, lightweight confection. While there aren't too many edges to the story -- no outright nudity, no raunchy sex romps, no bitter diatribes against men (or women) -- there's definitely some iffy stuff. Tom is clearly a player (though he's up front about his commitment issues with women, and they seem to like him anyway), marriage is lightly mocked, and a geeky character is made fun of time and time again. Characters also let loose with innuendoes and a few salty swear words here and there, there's a fair amount of drinking in social situations, and some products are pretty noticeable.

Some scenes of men and women in bed, but no outright nudity (guys in boxers, for example); sexual innuendoes about positions, etc.; a few deep kisses between two people falling in love; one scene in which men stare at another man in the locker room shower, implying that he's well-endowed; a woman tries on revealing lingerie and shows it off to a man.

A tearful argument; a punch is thrown at a key moment. Otherwise, just some competition between two men over a woman.

A man sleeps with women but won't commit to them, though he's clear about his priorities with them. He realizes that he's in love with his best friend and makes an effort to win her heart, though it requires breaking her fiancé's heart and some deceit. There's some harsh mocking of a supporting character who appears to be very nerdy. Overall though, the movie has tons of heart.

Signage for various New York City spots, including Figaro Cafe, Dean and DeLuca, Jerry's, and The Met. Mentions of Splenda, McMurray whiskey, Cornell, Lowry Seasoning, and Starbucks. Tom is the inventor of the cardboard cup holder found in many cafes, a fact mentioned and shown many times in the movie.

Lots of drinking in social situations, many close-up shots of whiskey while in Scotland (where locals seem to down glasses of it like water). An inebriated woman throws up at a party.