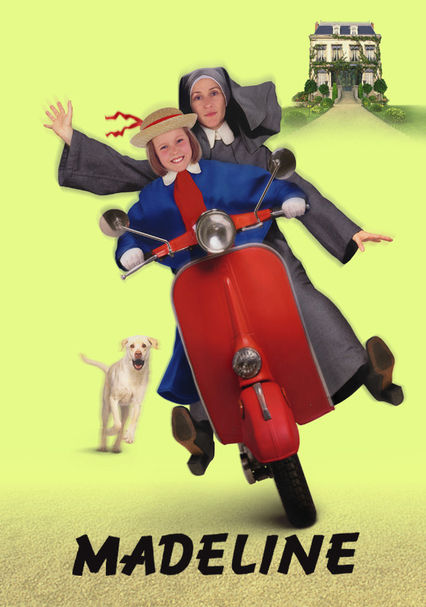 1998 PG 1h 30m DVD
A mischievous French girl named Madeline tries to save her boarding school from the real estate market but finds it difficult to persuade the building's owner not to sell. When that approach fails, she uses her wits to discourage prospective buyers.

Parents need to know that, Madeline is a live-action adaptation of the classic children's book about Madeline, a little girl who lives in a boarding school in Paris. This version presents Madeline as an orphan who expresses an awareness that she has no family and no real home. It also merges elements from the book Madeline and the Bad Hat, including the Spanish ambassador's son, Pepito. Suspenseful scenes include Madeline with appendicitis; an accidental fall into the river; a clownish but perhaps scary kidnapping; a chase with two kids on a motorcycle; and the threat of the girls' school being closed. A caring woman dies after a long illness and a dog is lost (but eventually reappears). A few instances of insulting language, swearing, and a scene with the little girls having fun with their cook's undergarments.

Young girls make fun of an older woman's bra and undies. The girls sneak a peek at a kissing couple.

Clownish villains (actual clowns who swallow fire, juggle, punch each other) attempt to kidnap two children and hold them for ransom. A few scary visuals are meant to unsettle the school girls: a tiger in a cage, escaping white mice, a snake, a boy trying to frighten them in a window, and a shadowy room in a museum. In addition to the kidnapping, Madeline has several close calls: appendicitis, a fall into the river, and a careening chase through the woods with kids on a motorcycle trying to escape from a truck.

A villain continually belittles his accomplices: "idiot," "stupid," and more. The girls call their landlord "Lord Cuckoo Butt" and "Lord Cuckoo Face." Some fart sounds, and references to a bra as a "booby basket."

Good things happen when the young heroine thinks positively, has faith that she can be effective, and stands up for herself and her school. Madeline helps a bitter, grieving man deal with his loss and react in constructive way.

In one scene a woman has a schnapps bottle on the table beside her.