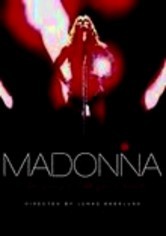 2005 NR 2h 0m DVD
Director Jonas Akerlund chronicles Madonna's "Re-Invention" tour in this documentary, offering a behind-the-scenes look at the collaborative effort and how supporting players are all integral to the success of the show. You'll get a glimpse at the audition process, backstage antics, live performances and even Madonna's family life. When her children and husband make an appearance, the provocative pop queen reveals yet another facet of herself.