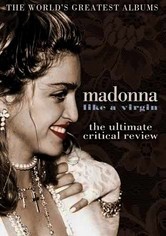 2009 NR 1h 0m DVD
The 1984 release of "Like a Virgin" gave Madonna her first number-one album in the United States and launched her into the pop music stratosphere. In this thoughtful reappraisal of that benchmark album, industry experts and music critics examine each track of "Like a Virgin," including such hits as the title song, "Material Girl," "Dress You Up" and "Over and Over." Archival interviews and performances are also featured.