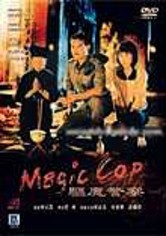 1995 NR 1h 27m DVD
Taoist master and driven cop Fung Zee (Ching-Ying Lam) uses his magical powers along with his street smarts as he tries to take down a drug dealer who may be one of the undead in this supernatural crime drama. His pursuit of the zombie kingpin brings him face-to-face with an enigmatic woman (Michiko Nishiwaki) who's about to give Zee a run for his money in an epic battle of supernatural skills. Wei Tung directs.