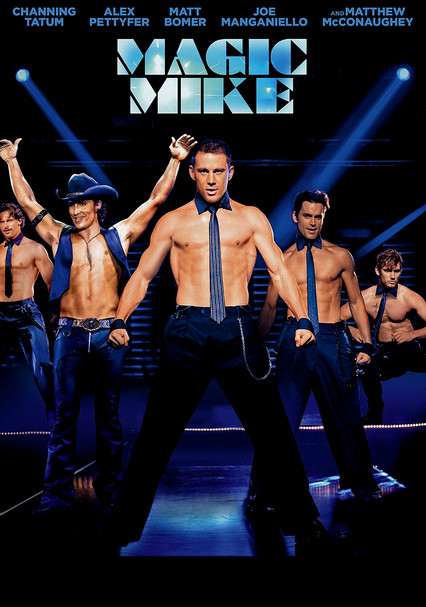 2012 R 1h 50m Blu-ray / DVD
This Steven Soderbergh-helmed look at the world of male strippers was inspired by the experiences of one of its stars, Channing Tatum, who plays a veteran stripper introducing a new dancer to the pleasures and perils of their profession.

Parents need to know that Magic Mike is an ensemble drama about a group of male strippers (played by Channing Tatum and Matthew McConaughey, among others), so there's a great deal of nudity. Although there's no complete "full monty," every dance sequence includes the guys stripping down to tiny thongs that show their butts and highlight their genitals. In one scene, a penis is briefly pumped before a man goes on stage, and several sex scenes feature topless women. Language is also quite strong, with "f--k" used in almost every scene. There's also lots of drinking and some drug use; an underage character nearly dies from an overdose. And two henchmen rough up someone they're trying to intimidate. Bottom line? The amount of nudity, language, and substance use make this drama too mature for anyone under 17.

Many scenes of nearly naked men performing stripteases. Most of the strip routines involve the men shedding down to a thong that shows off their butt and cups their penis. Several sex scenes feature topless women and men naked from behind. In one brief scene, part of a penis is shown in the foreground being "pumped" under the table before the character hits the stage (full "side" nudity rather than full "frontal," basically).

A drug dealer's two henchmen ransack Mike's house and rough him up a bit. There's a disturbing scene when a guy looks like he might be dead (but he's just unconscious).

For a movie about strippers, there are plenty of messages about the nature of unconditional friendship and ambition, the importance of family, and the difference between who you are what you do for a living.

Two Ford F-150 trucks and a Honda Accord are in several scenes, and in a couple of shots, brands like Pella Windows, Waffle House, and Cadillac are briefly glimpsed.

The strippers do a lot of drinking -- both to attract new customers and to have fun. All of the characters are over 21 except for Adam, who's 19. They drink cocktails, beer, and hard liquor and take (and sell) pills of Ecstasy and drink G (liquid Ecstasy). The underage character nearly has an overdose and is found passed out in a pool of his own vomit.