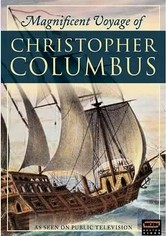 2007 NR 1h 49m DVD
A modern-day sailing crew traces Columbus's first Atlantic crossing, which altered the course of world history. Through replicas of the original fleet, the practicalities of the voyage are revealed alongside the future framework of human migration. Not only had Columbus discovered two new continents, but he also, albeit unwittingly, set into motion a global transformation, opening the door to further exploration -- and exploitation.