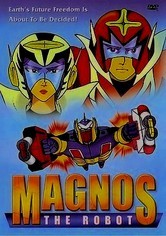 1976 NR 1h 30m DVD
Evil aliens that have invaded Earth retreat to the ocean floor when the Ice Age begins. Thousands of years later, they awaken, intent on finishing the job of conquering the planet. Scientist Sir Miles believes that his robots can defeat the aliens, but he needs more help. He enlists a karate champ to control the robot Magnon and his daughter to pilot Magenta. When the two robots unite, they form Magnos, a force to be reckoned with.