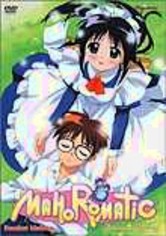 2001 NR 3 discs
Suguru is a single young man whose housekeeping skills are so poor that he decides to hire Mahoro, a buxom 19-year-old girl, to be his maid. Little does he suspect that Mahoro has ulterior motives for choosing Suguru as an employer. Possessing some superhuman abilities and claiming to be an android, Mahoro elicits suspicion from Suguru's friends and causes him some grief, but he keeps her on. Will she eventually tell him the truth about her past?