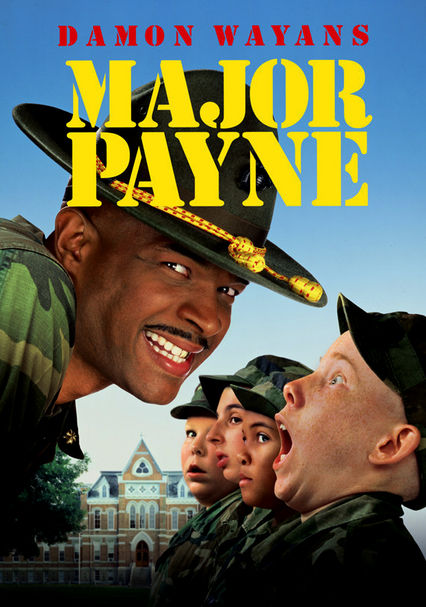 1995 PG-13 1h 35m DVD
When peace breaks out in America, hard-nosed Marine Maj. Benson Payne finds himself out of a job. Unable to handle civilian life's tedium, Payne takes a post as commander of some junior cadets at a private academy.

Parents need to know that this edgy 1995 send-up of military training features a hard-boiled major who routinely humiliates his recruits, ranging in age from 6 to 16. His calls them such names as "ladies," "turd," "worm," "maggot," and "scrotum sac." Other profanity includes "s--t" and "t-ts." Humor derives from frequent comic references to the violence of war and how some enjoy the rush of wartime killing. He describes violent acts -- he drove a man's nose into his brain -- but no real gore is shown. He breaks a wounded man's finger to get his mind off a serious leg injury. Expect some diarrhea and fart jokes.

Payne looks intently at the attractive school counselor and daydreams of domestic bliss with her, but there is no overt sexual content.

Payne comically helps a wounded, suffering soldier by breaking his finger to help alleviate leg pain. References to bloody war scenarios for comic effect, but none seen. Squad members get into a fistfight in the dark and are later seen with minor bruises. Recruits are buried up to their necks and made to train while wearing dresses. There's plenty of comic verbal abuse: "You want sympathy? Look in the dictionary between 's--t' and 'syphilis.'"

Even the most hard-bitten, militaristic killers can learn some sensitivity. Payne abuses all the recruits equally, with no regard for race, age, or ability.