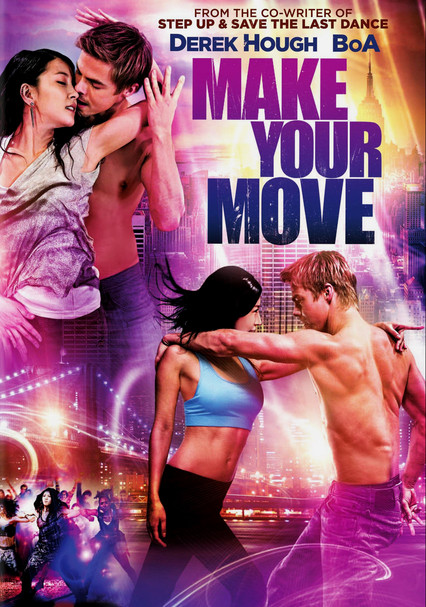 2014 PG-13 1h 50m DVD
Nothing can subdue the sizzle between dancers Donny and Aya, even when their respective brothers -- two rival club owners -- try to tear them apart. When hardships challenge the star-crossed lovers, their move-busting romance conquers all.

Parents need to know that Make Your Move is a Romeo and Juliet-style romance set in the Brooklyn nightclub scene. The main characters' brothers run rival clubs and are locked in a bitter feud, but the two young lovers are drawn together by their dancing skills. Derek Hough (of TV's Dancing with the Stars) and South Korean pop star BoA co-star, so you can expect plenty of lively dance numbers. There's also a good bit of drinking during the nightclub scenes, as well as several fist fights and a drive-by shooting (it causes fear and chaos, but no one is injured). Sexual content includes kissing, flirting, sex talk, and the implication that characters spent the night together; language isn't constant but does include "s--t," "ass," and (sparingly) "f--k."

Heavy flirting and brief kisses between a couple, including romantically charged dance sequences. One sequence culminates with the duo in bed, and they're later shown together in the early morning, making it clear that they spent the night together. Several references to "boners" and "hard-ons."

Several scenes feature people getting into fist fights. Some of the brawls are relatively even, while others show a group of toughs beating up an individual. One sequence shows a drive-by shooting that has a crowd of people running in terror but leaves no injuries.

Donny admits that he's always been willing to give up when faced with adversity, but here he finds a reason to stay the course and help his new girlfriend escape from a tough situation.

The film revolves around the Brooklyn nightclub scene and features many scenes with people (all presumably of age) drinking at clubs.